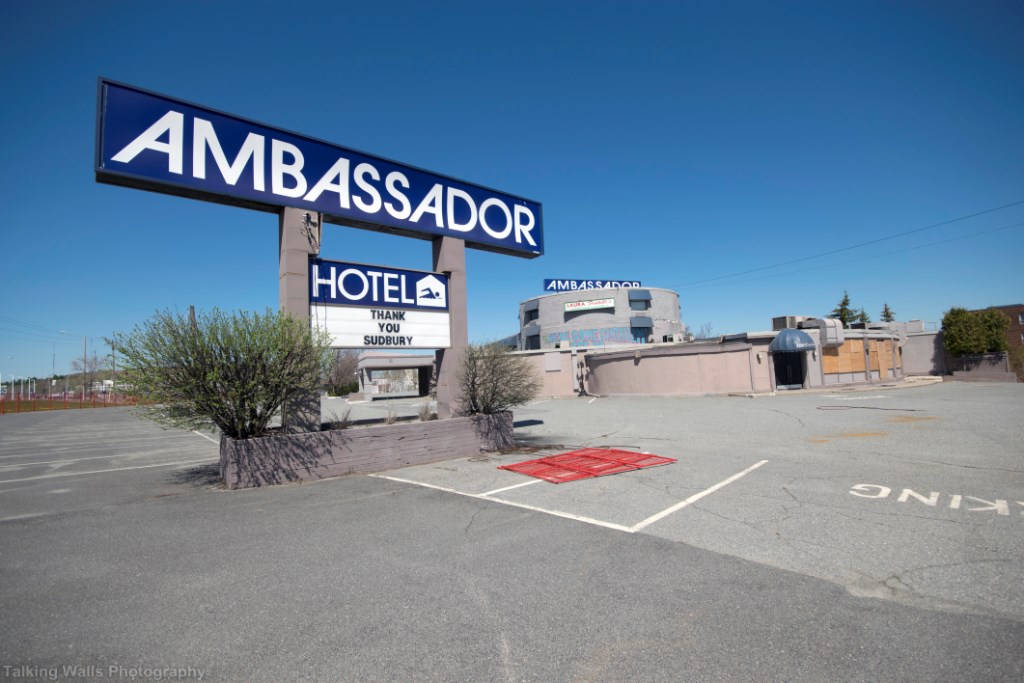 On March 8, 1968, four sisters from the Ceppetelli family from the subdivision of Gatchell (Sudbury) purchased property located at the corner of Falconbridge Road and The Kingsway. The Ceppetelli sisters were already experienced in hotel management. They were owners of a Lorne Street hotel by the name of The Four Sisters Motel, a business still in operation to this day.

The sisters opened up a new business venture under the name of The Ambassador Hotel. The hotel’s location was ideal. Situated at the corner of the Kingsway and Falconbridge Road, it would be one of the first hotels that visitors arriving to Sudbury from Highway 17 would see. The close proximity to the airport was another selling point for guests to stay at The Ambassador Hotel.

The hotel was also close to tourist attractions such as Dynamic Earth, Science North, Laurentian University, Bell Park and the city’s two colleges.

(Discrepancy: The year of the photos is marked as 1966 while the year of opening is said to be 1968)

The two floor Ambassador hotel had a capacity of 45 rooms. The rooms featured air conditioning, wireless internet and guests had access to concierge service. The upstairs restaurant also offered food for take-out to eat in your room.

Carol, one of the four sisters, married Bill Czerwinec. Another of the sisters, Norma, married a man named Richard. The nephew of one of the sisters, Michael Clement, was the general operating manager. Michael’s sister Laura Jeanne also worked in the hotel. It could very well be that Norma was the owner and namesake of Norma Jean’s.

Approximately 50 people were employed at the hotel which generated approximately $8.45 million annually (1).

The Ambassador Hotel offered their own wedding planning service. The service included offering a decorated hall, an officiating Minister, customized dinner menus, Jacuzzi Bridal suites, limo service and rehearsal dinners. For the gift opening ceremony, a brunch meal was available. The bride and groom could host their wedding at The Ambassador without worry about how guests would get back to their hotels.

Depending on the size of your business meetings, there were three rooms available: The Empress Room allowed for up to 200 people. For smaller business meetings, the Summit Room could fit up to 40 people and the Executive Boardroom could fit 10 people comfortably. The rooms offered audio/visual equipment and internet access. A Conference Coordinator would handle customizing food and drink menus for the attendees, including dinner.

The lower floors of the Ambassador contained the indoor pool, spa and exercise room. These rooms were completely dark, the power having been cut long ago. A somewhat rare feature was the childcare area where children could be cared for by staff, while guests used the exercise room or pool.

In 1982 the upstairs portion of the Ambassador had its own restaurant by the name of Bogarts.

Bogarts was eventually replaced with Laura Fratelli’s Italian Eatery. Laura Fratelli’s offered baby back ribs, gourmet pasta dishes, and an extensive collection of wines, rotisserie chicken and Canadian AAA beef. Guests staying in the Ambassador didn’t have to leave the hotel to go for dinner. The prices of course were somewhat higher than other restaurants in the area. Online reviews for Laura’s were favourable with a 4.7 out of 5 star rating.

The restaurant featured a large wall mural of Little Italy (an area of nearby Copper Cliff) painted by Sudbury artist Bob Hastings (who passed away May 11, 2020).

This is now. My photos taken in 2020 after Laura Fratelli’s closed:

An added attraction to the Ambassador Hotel was the nightclub that operated in the eastern wing of the hotel. The nightclub saw a series of name changes over the year including: Big Al’s, Faces, Norma Jeans, Yesterdaze and Chevies.

Decades ago the hotel had two bars. One was the “Ladies and Escorts” for the women and a separate bar for the gentlemen with draught beer costing .25 cents.

Please correct me if you can help with the time-frames below. The following bars operated from the Ambassador:

During the 1980s, Big Al’s attracted rock-and-roll acts such as Lee Aaron, Killer Dwarfs, Helix, and Kickaxe. One former audience member recalled a time when one act came up on stage and the singer was quite intoxicated. He made it half way through the first song and ended up falling into the amplifiers. He then tried to fight the bouncers as they carried him out.

I’ve often wondered how the hotel’s guests felt about having loud music and drunken people outside in the parking lot.

Carol’s husband, Bill (aka Mr. Shevies) was a part of The Ambassador management. He’s said to have been a good bartender, assisted in renovations during the Norma Jeans club and was a remarkable man who treated employees like his family. He has since passed away.

The last night club to operate out of The Ambassador was Ten Lounge and Nightclub.  The night club featured two dance floors, three full service bars and up to four DJ’s.

Popularity of the night club was, as most of Sudbury’s night life, based on complete randomness. I went there with some friends one Friday evening, to find under a dozen people inside. The doorman told us that if we came back the following night, there’d be a lineup to get inside. He was right. The club was packed to capacity. Attendees of the club were primarily in their early 20’s, and as much as it was a popular place to party, I always felt that I was too old even in my 30’s. We had the luxury to be on the ‘list’ which allowed us to bypass the lineup, because one of us knew the Clement’s family.

In the men’s washroom there would be a young fellow who’d have an assortment of men’s perfume lined up on the counter. When you’d go to wash your hands, he’d pull off a paper towel from the dispenser and hand it to you. People would tip him for using his services, such as using some of his colognes. I wasn’t fond of having someone touch a cloth that I was going to wipe my face with, some things I prefer to do on my own.

In 2019 the family announced that they’d received an offer to purchase the property and were subsequently ceasing business operations. August 26, 2019 marked the final day of business.

A Farewell party was held on September 20, 2019 at The Coulson to pay tribute to The Ambassador. Four days later an online auction was held to sell off the furniture and other assets inside the hotel. Leveredge Asset Solutions was hired to auction off more than 2,500 pieces of furniture, lamps, exercise equipment and more.

The Vancouver-based Sandman Hotel Group (yes, I thought of Metallica too) purchased the Ambassador Hotel. What plans they have for the former hotel are unknown at this time.

Photographs taken during my 2020 visit:

I had the opportunity to visit this abandoned(*) hotel in 2020. We arrived in Sudbury late one Thursday night and proceeded directly to the Ambassador to see if there was a way inside. To our amazement we were successful. We took a quick look around the pool area and then went for a late supper. We debated whether we should head back to take some photographs, unsure if the way inside would last until the next day.

Given my fatigue, I suggested we return the following morning. And so at approximately 9 am we arrived at The Ambassador. A man and a woman were walking the property and we overheard them mention something about having to repair the fallen demolition fence. I surmised that they were from Extendicare next door.

We tried the door that was previously open the night before and to our dismay it was locked. Fortunately we found another way inside and began our exploration. There’s a large amount of water damage on the main floor where the night club was. Mold hasn’t yet begun to grow but it won’t be long.

There may be some inaccuracies in this write up, I haven’t lived in Sudbury for quite some time.

Fri May 29 , 2020
I explored this abandoned house in St. Charles, Ontario back in 2010. At that time I used a point and shoot camera and over the years the photos were bulk resized when I required more website disk storage. For this reason the resolution and size are somewhat poor. This is what the house appeared like […] 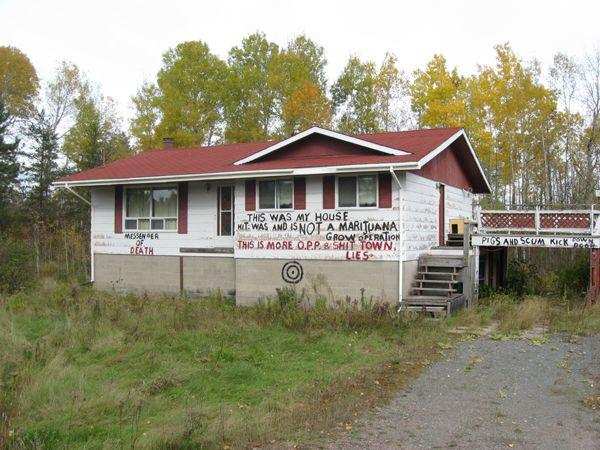