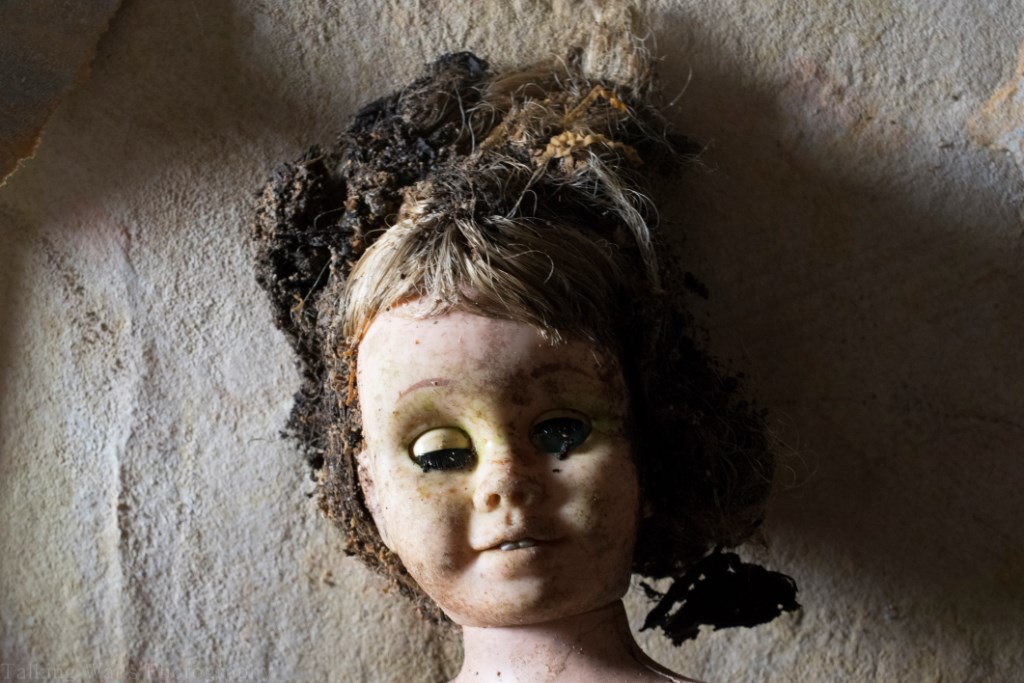 The urban exploring community chooses to give locations names in an effort to be able to communicate and differentiate them in discussions. The reference for this abandoned house is simply the “Money House”, the reason for this will soon be explained.

The house is located along a quiet rural road in an area where it’s not uncommon for you to see orchards and crops. I observed several migrant workers in the field just metres away from our exit point when it was time to leave. The workers stopped to watch us upon seeing my partner and I leaving the run-down house.

The house is nestled in between two occupied houses in an area where several orchards are located. Inside the house, we found several items that dated the era in which the house was lived in. Some of the items discovered inside were an old black and white tube television on the main floor, an antique AM radio, a phonograph, and a calendar from 1952! Calendars provide a reasonable estimate as to when a house was last lived in because people tend to update them on a monthly basis.

Portions of the roof have succumbed to the elements and time, as there are several holes in which daylight breaks through.

The kitchen has several old spice containers, rusting jars, and baking soda cans in the cupboards. Beyond the kitchen, you enter a small room with stairs leading down to the basement. I didn’t explore the basement. Most everything in sight is covered with a thick layer of dust, ceiling debris, and raccoon poop. I found a filing cabinet with photo albums that I believe originated from around the 1970s. There were legal papers dated from 1977.

Beyond this room, you’ll find the living room. The ceiling has rotted away and you can see through to the floor above. I did find a Barbie doll new in the box, which was about the only modern item to be found.

The stairs leading to the top floor are covered with drywall and wallpapering that have fallen away. This made navigating upstairs a cautious task so as not to slip on the stairs.

Once upstairs my spirits were raised when I immediately came upon an antique Singer Sewing machine in the hallway, followed by a wheelchair. I entered the first bedroom and discovered the old phonograph, AM radio, and a cross with Jesus on it. It’s not uncommon to find religious items in older homes as previous generations placed more value on religion that we do today.

There was a creepy-looking doll on the floor and a well rusted electric record player. I could just imagine having explored this house a few decades earlier! It was difficult to photograph the items in the bedrooms because of the clutter on the floor as well as my concerns about the stability of the floor.

In the second bedroom, I observed an old iron frame bed and a very old black and white television. Rays of light shone through several holes in the roof above. It was in this second bedroom that I saw the 1952 calendar and some clothes still hanging from the ceiling as if left to dry.

The siblings eventually passed away and the house was handed down to their three children. The family had a successful fruit stand for many years that operated in the 1970s.

The reason we call the house the Money House is that in March of 2014 a fellow urban explorer who I know, by the name of Freaktography, explored this house. While inside he discovered a plastic bag containing close to $7,000 in US and Canadian currency. This sparked many discussions between explorers as to what they’d have done with the money – the majority of the consensus was that they’d have kept the money. After all who would ever know?

To find out what happened after this, I’ll refer you to Dave’s story in which you can hear it in his own words. It’s not my intention to try to gain publicity from this story, but one cannot tell the story of this house without telling the story of the money.

It took some time for me to find where the house was located, but it was eventually added to our database. The 1950’s era that this house was locked into certainly made this one of the highlights of the exploring day.