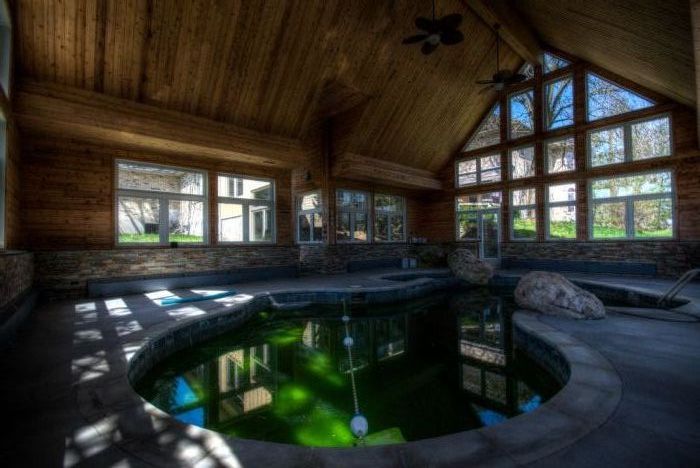 This vacant property was located at 1343 Sunningdale Road East in London, Ontario. It was built in 1984 and sat on 1.88 acres of land. It was listed for sale at $1.5 million dollars.

In the back of the property is an indoor pool room with 26 feet high wooden ceiling. There’s a strong cedar smell and chlorine aroma as you enter the pool room. Several double doors lead to the outdoor deck from the pool room. The stagnant water has turned a florescent green color that appears to glow in the light of the sun. There’s a small wading pool next to the larger pool. Each of the four walls in the pool area is made up of windows to allow light in, and the lack of neighbours in the back offers some degree of privacy.

Electricity to the house is provided in part by a solar panel system located on the roof. The electricity was turned off when I visited the party mansion though I did attempt to turn the solar power on.

Above is a photo of the living room in the front left of the house, with the dining room behind you.The house has seven bathrooms and five bedrooms in addition to oak wood floors and a double staircase. These windows looked out to Sunningdale Road.

A door just off camera leads into the kitchen area.

The living room/dining room are shown at the back of the above photo, the main entrance is shown and the double doors lead to the office den (below).

Shown above is a child’s bedroom in the upstairs of the house. The walls are painted with birds, flowers and a large tree.

Some people might find this bathroom to be outdated with it’s 80’s feel. Behind the glass walls are a toilet, shower and bidet.

In the basement you’ll find a child’s play room. There’s a child-height sink and door, plastic slide and a small theatre (just to the right of the green wall). Children watch movies on a large television screen. The play area has windows that look out into the hallway.

Downstairs were a laundry room, furnace room, apartment and a bar room.

The pool is located in the pointed roof structure. The far right basement was the kitchen/bar area and the kitchen mid-way center.

Why was the London party mansion vacant?

It’s believed that a family lived in the house until 2015. After the family moved out, a night club owner allegedly owned the property until June of 2017. Classified ads for basement rental units  were posted as late as March of 2017.

What happened to the London Party Mansion house?

Below is an advertisement for one of the parties held in the mansion:

The nightclub owner is said to have held events on weekends. An optional party bus would drive you to a night club afterward. Some of the event tickets were claimed to be over $1,000 and included open alcohol and drug bar as well as a seat on the bus. This seems to be somewhat exaggerated to me.

What’s more believable is that student parties were hosted (as recently as 2016) with over 500 tickets sold on a good night. The prices ranged from $15 to $30.

I can empathize with the neighbours who wanted a tranquil and quiet area to live.

It’s believed that the last owner was an overseas investor who paid $1.5 million for the property. They were asking at least $2 million and developers were not willing to pay that amount. The property remained relatively untouched.

While exploring this location we observed a couple in the lot next door salvaging metal objects. On our next visit we observed the heaters in the pool room had been ripped out.

A water pipe in the basement has broken and water is slowly filling the basement. Black mold will soon follow, rendering the house unlivable.

The house was demolished in late 2019.

Mon Feb 10 , 2020
The Cat Lady House in Burlington, Ontario stands out for many explorers because it was the first place where they had an opportunity to explore their first time capsule house. It was first discovered by the explorer known as Freaktography. A time capsule is a reference to a location that’s been perfectly preserved for several years […] 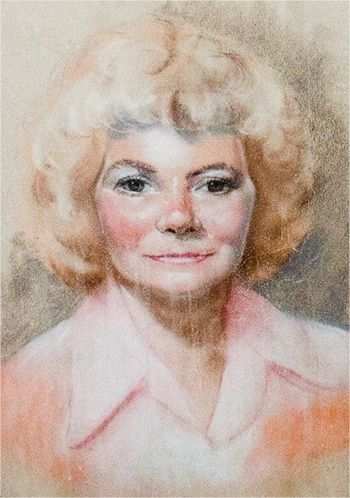